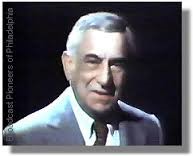 Many journalists and others in Philadelphia had a connection with John Facenda. Mine was certainly not the oldest or perhaps the closest but it was so special. For those reading about John Facenda for the first time – a little history. John was anchor of the first 11 PM local news broadcast in America. That was in 1947 – the year after I was born. He became the “dean” of local television news in Philadelphia as the WCAU-TV anchor for both the 6 PM hour long news and the 11 PM half-hour show daily until 1974. And there were indeed many in Philadelphia who simply wouldn’t sleep well until hearing John Facenda say “Have a nice night, and a good day tomorrow.”

What perhaps only a few knew, was that John Facenda, along with another WCAU notable, Tom Brookshier, became my business partner in 1972. They were both investors in my film and video production company – DBS Films, Inc. – started while I was still a reporter and producer at the TV station.

As a novice news writer/reporter/producer, John took me under his wing in 1968 and became a friend, a mentor and sometimes a tormentor. He was exactly the same age as my dad – born in 1913. When I took a leave of absence in 1970 to form a 24-hour cable TV news network with a group of Philadelphia investors, John protected my job. CBS wanted to fire me for competing with their cable operation (then known as Viacom). I returned to my job at WCAU, hat-in-hand, when the stock market collapsed in April of 1970. Some of the key people I was working with moved onto join Ted Turner’s organization a few years later. It was the 24-hour news network that became known as CNN. In fact, they called me asking if I wanted to work in their Washington bureau as a producer. But by then I was committed to my own production company. (The paths we choose, eh?)

Everyone has his or her favorite story about John. I have several. Among the most endearing is the story of the horse. (Channel 10 colleagues are now rolling their eyes remembering the horse.) The horse story began with reporter Ron Miller’s excellent series on recidivism amongst ex-cons. He shot most of the story at a state correctional facility in Reading, PA. There, he met Lou. Lou, an ex-con, was instrumental in the story, and Ron asked our news director if Lou could join our team as a sort of handy-man fixing gear when needed. Lou would repair teleprompter typewriters and other devices around the newsroom.

One day, Lou walks into the office and tells us that he won a carriage race horse in a poker game. Since gambling was a violation of his parole, he asked if we would purchase ownership of the horse. He would take care of it for us, and it was a real winner, guaranteed to generate cash for us. So, for $100 each, ten people in the newsroom bought the horse. I started at WCAU making $140 a week. So when Lou offered us the horse in late 1968, I really didn’t have $100 to spare. John Facenda offered me 25% of his share. So for $25, I bought a piece of horse. (You can guess which piece.)

One day, Lou failed to show up for work. And the next day, we received a letter from the track where the race horse was housed in Northeast Philly. It said the horse was pregnant (we had no idea it was a girl) and the track was owed $5,000 in storage and medical fees. John Facenda, absolved me of my debt and assumed his share of the cost. The horse, as far as we knew, never raced.

So that’s one story. Here’s the other side of my complex relationship with John Facenda. John was anchor of both the 6 PM and 11 PM news programs in 1970. I was producing the 11 PM show several days a week. My colleagues Bill Baldini, Mike Quinn and Joe Daley rotated as producers with me. I prided myself on taking complex stories and making them useful for the audience. But there was one problem. Between programs, John would often go out for dinner and have a few drinks with the guys at a restaurant south of the station on City Line Avenue. I found that his ability to read the 1” high type on our yellow, sprocketed teleprompter paper, was sometimes slightly impaired. So, I would tell John that I suspected there were teleprompter errors caused by the high school kid who typed it (true enough by the way) and he and I should review the entire prompter paper from top to bottom before the show. When I did that, reading errors were reduced.

Well one night, I had a particularly complex tax story that took a lot of effort to get just right for our audience. Let’s just say that John’s reading of the story was imperfect. I’d worked so diligently on the story that I was upset it was bungled on the air. I confronted him after show. He blamed the teleprompter. So I grabbed the prompter paper, found the script and showed him that it was accurate. Wrong move! The earth began to shake as John Facenda, with that magnificent, deep, resonant and powerful voice scolded me for questioning his abilities and his authority. It was monumental. And it tore me apart. This man, who had become so important to me, was so angry at me that I was moved to tears. I fled the office. Hopped in my little Alfa Romeo and sped through Lower Merion on my way home to Bryn Mawr, nearly hysterical with sorrow. The tears, however, failed to convince the Lower Merion cop who stopped me for speeding to give me a pass. “But John Facenda just yelled at me” I pleaded. It was a plea only those of us who really knew John would understand.

The next day I apologized to John and all was well. Our relationship grew over the years. There were gifts for my boys at their birth. And, after I left the station and started producing sports films for the North American Soccer League, John (as an investor in the company and as a friend) agreed to narrate those films for $1 over union scale. He narrated the 1973 and 1974 Philadelphia Atoms season highlights films, the 1975 Tampa Bay Rowdies season highlights film and the American Airlines film we produced called Soccer Goes American featuring Pele (who joined the New York Cosmos that year). He also appeared in a couple of commercials I produced after he left the anchor desk at WCAU. Annually, John and Tom would join me and the other investors in my company for a luncheon at the Sheraton in Valley Forge where we had our offices. We’d disburse profits to the investors and catchup with each other.

A week before John Facenda passed way, I visited him in the hospital. They wouldn’t let him wear his famous toupee, so he wore a baseball cap at all times. I was accompanied by the former news director, Barry Nemcoff – now also a dear friend of mine and at that moment an employee of my production company. Barry and John also had a strong personal relationship. John asked to speak privately with me. I sat on the edge of his hospital bed and he told me he had a dream about me. I was really touched. This dear man who had done so much for me, lying quite helpless on his deathbed, had me among his final thoughts.